The development of the hemp industry

A week ago it was 20 April 2021. For most people it is just a regular day, others know it as 420 (four-twenty). 420 is a day in which cannabis products are at the center of attention. It is a day centered around the celebration of the non-mainstream culture (counterculture holiday) in which weed is used in public a lot. Before the cannabis culture became as we know it today, the industry has had many very interesting historical developments. This article will dive into the evolution of hemp usage from the ancient world towards today.

420 started in California in 1971 with a group of teenage students from the San Rafael High school. They planned to smoke marihuana at 4:20 pm (16:20) while also hunting for abandoned cannabis crops. Although their journeys were not successful, the term 4:20 remained a code word for them to tell each other they are going to smoke weed. The Waldos, their group name, became more popularized by American writer Steven Hager. He wrote about their adventures in 1991. 420 became even more known when one of the Waldos, part of a relatively famous band, stated that 16:20 is a socially acceptable time to smoke weed.

Nowadays, 420 is a celebration of the existence of the drug cannabis and a protest against the illegality of it. While in the Netherlands there is nearly no affection for politics, 420 has a political nature about liberalization and legalization of cannabis in many countries. The 420 protests are especially huge in America and Australia. However, it also takes place in other places like London and the University of Otago in New Zealand. During 420 there are protests over the whole world. For example, the students of the University of Ljubljana in 2018 and a 420 event in Northern Cyprus in 2015. In North America 420 is even an official district holiday.

The history of cannabis

The usage of hemp and cannabis have had a rich development before it became a popular private drug and citizens started to protest for more liberalization during 420. The history of the cannabis industry started far before the year 0. The most prominent role in history is for two cannabis plants named hemp and marihuana. The biggest difference between those two is the limited amount of THC in hemp. THC is the substance that creates the stoned and psychoactive feeling. This low percentage of THC created an opportunity for using hemp in daily products and for daily usage. Hemp was possibly the first plant to be cultivated and was used in Japan as food source in 8000 BC. Historians found signs of hemp usage as a source for creating clothes, shoes, ropes, and paper in ancient China. Also, archaeologists found signs of hemp usage in ancient India and Korea far before the year 0.

The global spread of hashish started in the Persian and Arab world by Hindu travelers. It was first introduced in Iraq in 1230. It was the start of the cannabis culture due to large/scale consumption in superpowers like India, Romania, Egypt, and Mesopotamia. First, these countries used the product as medicine. Later, the drug became more popular for recreational usage especially, after the introduction of tobacco. The Spaniards introduced industrial hemp to the Western Hemisphere and cultivated it in 1545. Another reason for cultivation in Europe was due to the invasion of Napoleon in Egypt. As being an Islamic country, alcohol was not available and the troops of Napoleon tried hashish instead of alcohol. The increasing colonial powers of Europa increased the interest and knowledge about this product for the European countries. The private usage of the drug became more and more part of the cannabis culture.

After years of the increasing popularity of cannabis, many leaders set restrictions on production and consumption. The prohibition of cannabis in Arabia in the 1300s was the first. Later, Napoleon banned the usage of drugs for his soldiers since it became more popular after the invasion of Egypt. After mass bans in the late 1800s by foremost Islamic countries, the ban of cannabis also reached the United States. The countries now known as the ‘western world’ massively banned cannabis in the early 1900s.

During the early 1900s, international politics started to focus more on the policies about cannabis. The international conference in The Hague was about the international Opium Convention that banned a lot of exportation options in 1912. It was a response to the increasing criticism of the opium trade and it criminalized the usage and cultivation of cannabis. In 1938 the world nations added the total prohibition of trading Indian hemp when it was illegal in a country. It only accepted shipment for medical and scientific purposes towards countries that did not totally ban Indian hemp.

The status of cannabis in America regained popularity shortly after America tried to destroy the US hemp industry in 1937. The second world war was the reason to continue with the hemp industry to make uniforms, canvas, and ropes out of it. The government underscored the importance and opportunities hemp has for the production of regular products. The product changed from criminalized product towards a popular product as ‘the product to win the war’.

The increasing popularity of the hemp and growing industry as a raw material also stimulated consumption again. Especially, the cannabis type marihuana boosted subcultures like Jazz, electronic, and hip hop music. Besides subcultures, the popular drug also reached the middle-class mainstream in the 1960s among youngsters in the USA. Due to internationalization, cannabis usage was also boosted in other Anglo counties among the youth. This includes countries such as the UK, Canada, Australia, and New Zealand. This increasing usage resulted in another governmental action from the USA: ‘the war on drugs’. It was again a movement from the government that tried to limit the usage of cannabis for consumption as a private drug.

With the war on drugs still going on in the Anglo countries, The Netherlands was the first that took a step into liberalization and legalization of cannabis. In 1972, the Dutch government divided drugs into less dangerous and more dangerous categories. The categorization of less dangerous was an important step towards the modern cannabis culture of today. The Netherlands introduced a very unique concept in 1976: the coffee shops. Coffee shops are regulated places where cannabis is sold. The concept is still unique in the world these days. The steps the Netherlands took were not legalization of cannabis usage. They decriminalized it. It resulted in openly sold weed up to 5 grams per person while the police were still allowed to confiscate it. Other countries followed with decriminalizing cannabis, such as Portugal (2001), Belgium (2003), Chili (2005), Brazil (2006), and Czech Republic (2010).

The current situation of Cannabis legalization

Interesting in the whole cannabis story is that the interest as a medicine totally disappeared during the large-scale worldwide bans. It resulted in more attention for cannabis as a private drug than a medical drug. The medicine industry regained interest in the 1970s. First, cannabis was used for cancer and AIDS patients as a relief for the effects of chemotherapy and wasting syndrome. Currently, it is fully legalized in the Netherlands for medical usage and you can buy it in the drug store. It is used for muscle strain, problems with the nerves, chronicle headaches etcetera. In the Netherlands, the medical functioning is by inhaling it or use weed oil. Cannabis is not used as a healing drug here. The Dutch healthcare industry uses it as a stabilizer or reducer of complaints and side effects. In total 45 countries have legalized the medical usage of cannabis, within each country different rules about whom can use it and with what reason.

Although the decriminalization started by the Netherlands is a widely accepted phenomenon right now around the globe, complete legalization is very unique. Currently, only Australia (only in Canberra), Canada, Georgia (usage legal but selling isn’t), South Africa (usage legal, own production decriminalized but selling is illegal) and Uruguay have legalized the drug for private usage. Based on legalization status, the Netherlands is not a frontrunner anymore. However, the coffee shop infrastructure is still very unique. Several countries that legalized the drug, criminalized the production and selling of cannabis. Therefore, the life of a soft drug user might be easier in The Netherlands due to the coffee shops.

The current situation in the Netherlands means that buying and consuming weed is not legal but accepted and production and distribution are still illegal. Thus, the coffee shop supply chain includes many illegal elements. Therefore, the Netherlands starts with pilots for legal cannabis production in order to close the coffee shop supply chain with only legal elements. The new pilots enable the hemp industry to create a legal supply chain for the coffee shops. It is the next step in the Dutch cannabis regulation in order to remain on top of the worldwide modern drug policies 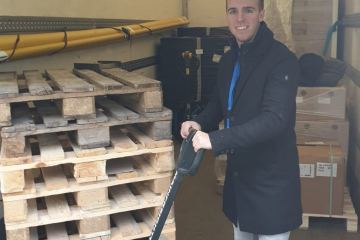